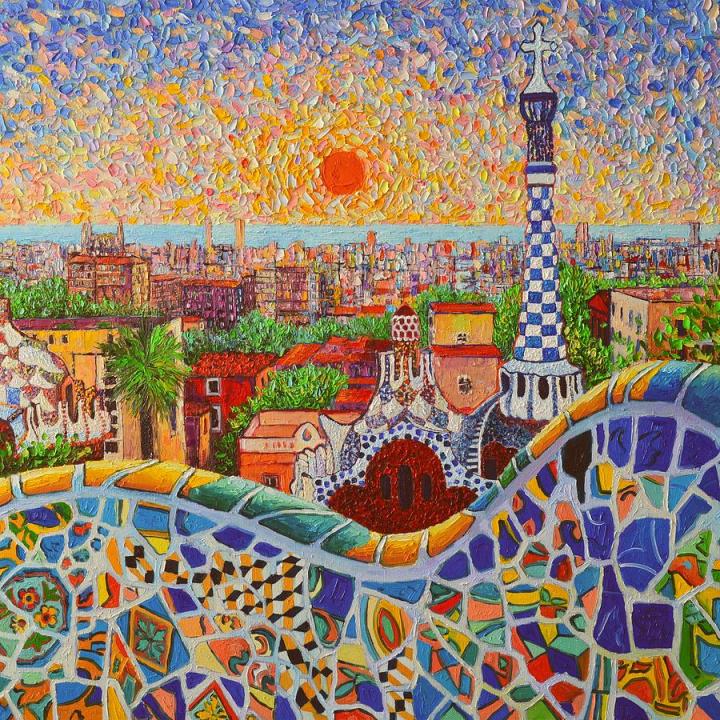 day by day, train by train, from page to screen: the story of our European adventure.

It was 4.30 am: that strange time which isn’t really early morning or dead at night and honestly should be slept through to entirely avoid the matter. Yet this would be the time to set our alarms and heroically fight our way to consciousness, all pouring with sweat as we rolled from our tents into nature’s pouring sweat outside. The pathetic fallacy reflecting the general mood as well as the day to catch up with us. We ventured to the station and bid farewell to the oh-so-universally beloved Mr. King (kind of creepily referred to as ‘Dad’ by the vast majority of the student company). His consistently inconsistent cynicism, criticism and casual sexism was to be surely missed…

The first of many chocolate croissants were bought for breakfast and swiftly swallowed to warm up and energize for the first obstacle of the day: train reservations. They had all been sent to our first hostel in Barcelona (notoriously hailed by TripAdvisor as essentially the world’s worst hostel, ever (although having spent the last week sleeping in tick-infested fields, all in the name of Edinburgh’s Duke, most of us felt invincible in terms of humanly hygiene related issues)).

yes, I did just use a double bracket

We unnecessarily paid for new reservations, linguistically supported by my krazy friend Kaila and we bubbled effervescently onto our first train from Santander to Madrid to commence our ‘epic journey of a lifetime‘ with grins perhaps not quite as cheesy or as the culturally diverse models on our Interrail leaflets.

i never had the cheekbones anyway.

To be organised, we called the (ironically named) Mellow hostel to check that our reservation package had arrived for us.

and so it began: five hours completely dedicated to tracking down our parcel through DHL, feeling like we were back in the language classroom, perfecting our accents through the sheer number of times we had to pathetically repeat ‘hablas inglés?’ to each employee, getting slightly nearer to the solution each time but then snapping back because of a missing, typically over-complicated detail. The process was nearly as tedious my attempt at describing this very situation.

Firmly rooted in this poco problemo, we decided to take a break and a bite to eat at Madrid station to reserve our tickets for the next stage of the journey.

We hadn’t been ‘travelling’ for more than 4 hours and it felt like we weren’t going to make it half-way down a single country.

But spirits were lifted from the lower vertex of this parabola by a kind ticket man *who looked too much like a Platonic conception of what you think a ticket man would look like to describe him in any other way* who, pressing his fingers to his lips *unless he was just itching* got us onto the next available train in the business class coach with Kaila bagging an exclusive private suite at the front of the carriage.

But this was not before sprinting through the station, with the climate and the prospect of stressful physical movement causing us to sweat once again; the last piece to this jigsaw vision being Flo, who felt it necessary to scan her burger king through security to take it with her.

she had it her way

Things were looking up as Liss and I looked down a train toilet, finally managing to track down our parcel and send it to the (now not-so-mellow) hostel.

We could finally flatten out the creases of our day within the comforting confines of an air-conditioned carriage in a reclined chair while watching the Spanish desert sweep by, undercut by the dubbed showing of the Hunger Games, ignoring the tentatively growing rash accumulating on the arms of both Flo and Larissa. They wouldn’t dare spoil the moment of something actually going right for the first time yet.

Though it may shock, we did actually reach Barcelona and *with Freddie Mercury and Montserrat Caballé belting in my head,* we strode up to reserve the tickets to Valence which, as foretold in our prophetic plan, we weren’t allowed to book in advance.

We turned away from the miserable man with the hipster nose ring, tears pricking our eyes.

Thinking for sure that all was over before it had really begun, we fired one more shot and approached a more modest looking woman with cool glasses and a black pixie bob, begging to be let on to a train.

‘…you don’t want to sit next to each other?‘

‘well, theoretically we would love to but we don’t have to at all pls pls pls’

She definitely thought we were mad *but we were genuinely just over-appreciative, which can never be a bad thing*, laughing with a slight tinge of genuine concern as she handed us five golden tickets for the TGV to Valence.

Hoping that we had experienced our spiritual quantity of bad luck *for accumulated life sins* for the entire duration of interrailing within the space of 10 hours, we finally exited the vicinity of public transport for yet another trek across the entirety of Barcelona. We briefly greeted Gaudi’s Basilica de la Sagrada Família* but morally and spiritually objected to the price of entry. After climbing an incline mentally comparable to what we had just endured on the Picos expedition, we checked in at the Mellow hostel *the image of bed-bug bitten arms pointlessly pinching the back of my mind*

but to our surprise, it wasn’t so bad at all.

The unbelievably stressful but simultaneously stimulating day came to a comfortable close, my mouth did the same around a well deserved take-away pizza

accompanied by the manager’s revelation that Larissa Naidoo was, in fact, of Indian heritage.

more of a sporadic cerebral dumping ground than a blog

any content over a certain number of days old I’m probably embarrassed by, so judge softly